Airtel has introduced its new content service called Wynk Games. The new service for Android users has more than 2,000 games across genres including sports, cards, racing adventure, puzzles and kids. The app at the moment is in the beta phase, and offers global and local games from various game genres. 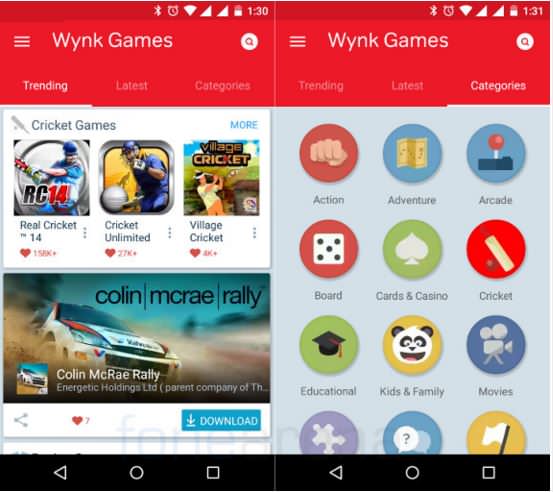 Wynk Games, which is available for Android users, is basically a platform for hosting games. It offers games from multiple local and international gaming houses including Reliance Big Entertainment, Hungama, Square Enix, Zeptolab, Thumbstar, Tresensa, Bulkypix and Nautilus Mobile. The app offers both paid and premium apps which users can download at no additional cost, although some games might get locked after users play a few levels.

“Akin to ‘Wynk Music’ and ‘Wynk Movies’, customers using ‘Wynk Games’ can download games and play them offline. ‘Wynk Games’ is also an ad-free application, thus delivering the best experience for avid gamers”, said the company in a release.

Airtel’s Wynk Games app can be downloaded. As part of an introductory offer, Airtel subscribers can access it for free, while other users will need to pay Rs 29 per month. By paying Rs 99 per month, users will get unlimited access to games with no additional in-app purchase charges.

Salesforce buys developer of quoting and billing apps for SMEs

January 3, 2016
Comments Off on Salesforce buys developer of quoting and billing apps for SMEs

Don Bradman Cricket 17 Release Date for PC Announced; May Not Be Available on Disc

November 26, 2016
Comments Off on Don Bradman Cricket 17 Release Date for PC Announced; May Not Be Available on Disc

December 11, 2016
Comments Off on Super Mario Run Won’t Work Without the Internet

Use Nintendo Switch controllers with the NES Classic with this adapter

March 17, 2017
Comments Off on Use Nintendo Switch controllers with the NES Classic with this adapter

January 31, 2017
Comments Off on Health benefits of Forskolin supplements

October 25, 2017
Comments Off on Budgeting Energy in the Workplace
MTNL to offer free national roaming to its subscribers from January 1st
Starting March 2016, dial 9 on your phone to send a distress alert to the police
Like us on Social !
Subscribe by email !