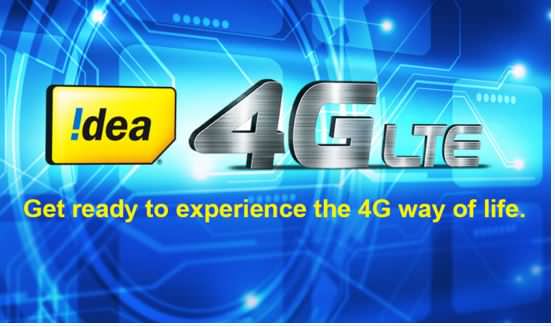 Idea’s 4G LTE plans start at Rs 246 for 1GB of data and go up to Rs 1,497 for 12GB of data. Validity and rates of Idea’s 4G packs might vary depending on the circle. Until March 31st 2016, the telecom operator is offering double 4G data on all the packs for both prepaid and postpaid subscribers. The brand is offering 4G trial packs starting as low as Rs 29.

Idea has tied up with Hungama Digital to offer a rich collection of music content at a monthly subscription of Rs 99. New 4G subscribers of the brand can subscribe to the pack for Rs 29 until March 31st 2016. Idea has also partnered with EROS to offer movies and videos for a monthly subscription of Rs 49 (Rs 29 until March 31st).

Idea users in these 75 towns can avail 4G services by upgrading their existing SIM cards to new 4G SIM cards via Idea stores nearby. The brand has also partnered with several manufacturers and e-tailers for special data offers on new 4G LTE-enabled smartphones.

Idea announced that it will be offering 4G services in Belgaum, Calicut, Cuddalore, Chitradurga, Guntur, Kakinada, Kancheepuram and Trichur by December 31st. It will be expanding 4G services in all Southern India metros and large towns, including Bangalore, Chennai, Hyderabad, Trivandrum, Mangalore and Coimbatore by March 2016. By June 2016, the brand is planning to expand its 4G footprint in 750 cities across 10 telecom circles in the country.

October 25, 2017
Comments Off on Budgeting Energy in the Workplace

February 15, 2017
Comments Off on Google Gives Google+ Some Nips and Tucks

March 11, 2017
Comments Off on Verizon Ventures and R/GA partner to launch a digital media ‘venture studio’

November 24, 2016
Comments Off on Unique Power and Strength of Clenbuterol Supplement

Supplements of the Higher Range and Quality

September 26, 2016
Comments Off on Supplements of the Higher Range and Quality

SeniorWorld launches the Easyfone for the elderly

December 30, 2015
Comments Off on SeniorWorld launches the Easyfone for the elderly

October 24, 2017
Comments Off on Digital Marketing is the future for companies
Reliance Jio launches 4G services for employees ahead of commercial rollout in March
Lenovo inaugurates fully-owned service centres in New Delhi and Bangalore
Like us on Social !
Subscribe by email !