Indian smartphone maker Intex has been pretty active lately, launching a slew of devices in the budget as well as the mid-range segment. Only recently, the brand launched the Intex Cloud Flash in the sub-Rs 10,000 segment, with a Super AMOLED display. Prior that, the Intex Aqua Super with 3 gigs of RAM and 4G LTE support was launched for a similar price. Now, the brand has announced another loaded device, dubbed the Intex Aqua GenX, which rocks a metallic unibody design along with other impressive features. 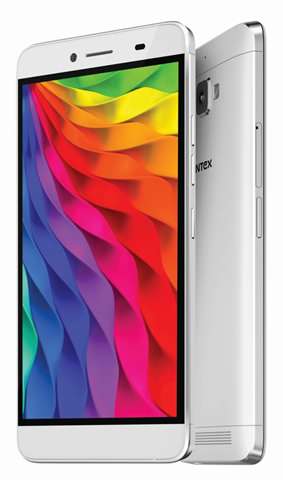 The Intex Aqua GenX sports a large 5.5-inch full HD IPS display, with a layer of Dragontrail Glass to keep the screen free from dust and scratches. The phone comes powered by an octa-core MediaTek MT6753 procesor clocked at 1.3GHz, aided by 2GB of RAM. Inbuilt storage is rated at 16GB, which can be expanded up to 128GB using a microSD card. Camera-wise, the Intex Aqua GenX features a 13-megapixel primary camera along with an LED flash, and a 5MP front-facing shooter. The phone runs Android Lollipop v5.1. Connectivity options include dual SIM slots, one of which is a hybrid slot, and 4G support. The juice is provided by a 2,850mAh Li-Po battery.

The Intex Aqua GenX gets the Matrabhasha feature, which provides support for as many as 21 Indian languages. The phone also rocks a customisable button, which the brand calls a Q-Key on its right spine. The key can be used to access any app or feature.

The Intex Aqua GenX can be grabbed to two colours variants – Silver and Champagne. The phone has been priced at Rs 13,299.

December 29, 2015
Comments Off on Zen Mobile launches the 3G-enabled Cinemax 2 featuring a 5.5-inch display and quad-core CPU
The YU Yutopia boasts a 5.2-inch QHD display, 4GB of RAM and 21MP camera
Qualcomm renames Snapdragon 618 and 620 processors to Snapdragon 650 and 652
Like us on Social !
Subscribe by email !