Apple has released the iOS 9.2 update to the public. The size of the update is around 260MB, and it is being rolled out in phases to iOS users across the globe. The update brings bug fixes, Apple Music improvements, and upgrades to the News app, among others. It is available for supported iPhones, iPads and iPod Touch units. In addition to the iOS 9.2 update, Apple has released the watchOS 2.1 update as well. 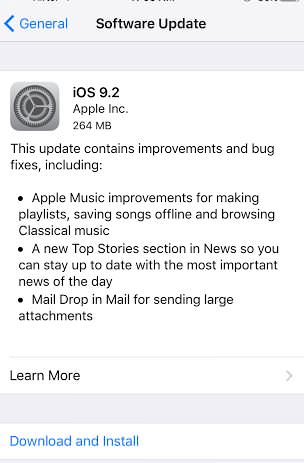 In the new iOS 9.2 update, Apple’s voice-assistant Siri now supports Arabic in Saudi Arabia and the United Arab Emirates. Apple Music, News, Mail, andiBooks have all received new features. Apple Music now allows you to create a new playlist when adding a song to a playlist, download albums or playlists from iCloud Music Library, check which songs have been downloaded with the new download indicator next to each song in My Music and Playlists, and find music, composers and performers while browsing Classical music in the Apple Music catalogue.

In the News app, now users can stay up to date with the most important news of the day in the US, UK and Australia. Users can use Mail Drop in the Mailapp to send large attachments. iBooks now supports 3D Touch for peeking and popping pages from the table of contents, notes and bookmarks. Additionally, the update brings support for listening to audiobooks while browsing the library, reading other books and exploring the iBooks Store.

As far as the watchOS 2.1 update is concerned, the update brings support for system languages in Arabic, Czech, Greek, Hebrew, Hungarian, Malay, Portuguese and Vietnamese. It comes with a right-to-left user interface, the ability to switch between Latin and Hindi numerals for Arabic, support for Islamic and Hebrew calendars, support for dictation in English (Malaysia), Czech, Greek, Hebrew, Hungarian, Portuguese (Portugal) and Vietnamese, and some other bug fixes.