During Microsoft’s FutureUnleashed event in Mumbai, CEO Satya Nadella announced that the company would be launching the Surface Pro 4 in the country in January 2016. Now Microsoft has sent out invites for a launch event on January 7th. The invite reads that “Start fresh on a brand new surface”, which pretty much confirms the launch of the Surface Pro 4.

The Microsoft SurfacePro 4 was unveiled in October this year alongside the Surface Book laptop at the Windows 10 event. The convertible sports a 12.3-inch display with PixelSense technology and a layer of Corning’s Gorilla Glass 4. It runs Windows 10 Pro, and is backed by an up to Intel Core i7 processor, coupled with up to 16GB of RAM. 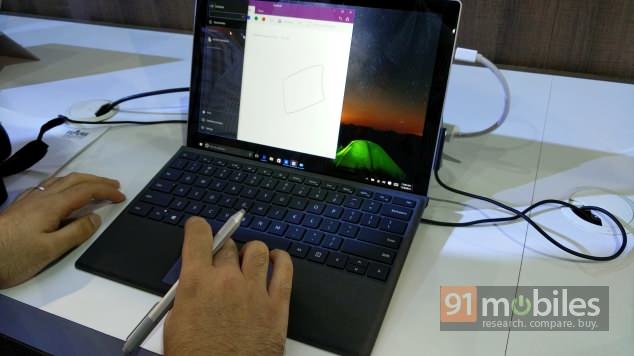 The Surface Pro 4 (first impressions) offers an 8MP rear camera, a 5MP front snapper, stereo speakers powered by Dolby Audio, up to 1TB of storage, up to Intel Iris graphics, and up to nine hours of mixed battery life. The slate also comes with a 30-day free trial for Office apps.

The Surface Pro 4 comes with an optional Type Cover keyboard accessory, which allows it to be used as a full-fledged Windows 10 laptop. It also features an optional Surface Pen stylus. We’ll know the device’s price and availability details in a few days, so stay tuned for more updates.

February 6, 2019
Comments Off on SoftBank Reports Rise in Operating Profit on Rising Valuations of Its Investments

March 24, 2017
Comments Off on Online ticket marketplace Vivid Seats is looking to sell for $1.5 billion

November 21, 2016
Comments Off on Pokemon Sun and Pokemon Moon Now Available in Japan, US, and Australia

December 30, 2015
Comments Off on Google partners with RailTel to offer free Wi-Fi services at railway stations across India

December 22, 2016
Comments Off on Over 70 Percent Rural Citizens Have Adopted E-Wallets, Says IT Ministry
OnePlus introduces a Sandstone Black iPhone case, bundles it with a OnePlus X invite
Shilpa Shetty and Raj Kundra introduce Viaan Mobiles, launch a feature phone and four smartphones
Like us on Social !
Subscribe by email !