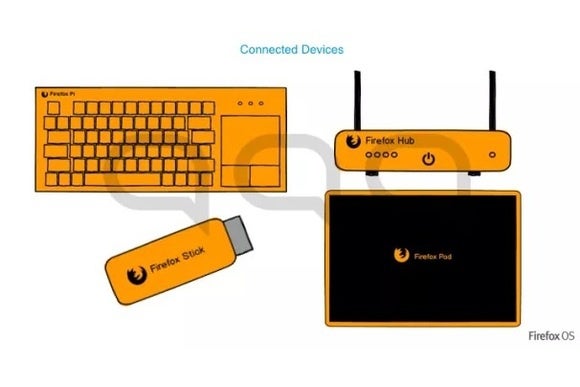 Although Mozilla is walking away from Firefox OS on smartphones, the browser-based platform isn’t dead yet. Citing leaked internal documents, a report by Hipertextual (viaSlashGear) claims that Firefox OS is headed to tablets, routers, HDMI sticks, and keyboard-based all-in-one PCs.

Arguably the most interesting of these plans is the “Firefox Pi,” a keyboard with aRaspberry Pi mini-PC inside, running Firefox for web access. The alleged documents note that the keyboard could plug into spare TVs (including old analog sets) and monitors, and aims to somehow “Harness the maker movement.”

Mozilla may have plans for a Firefox-powered router as well, dubbed “Firefox Hub.” The device would have built-in privacy and parental controls, automatic updates, web server hosting, and a web-based controller for smart home devices. It sounds fairly similar toGoogle’s OnHub routers, which are built atop Chromium OS.

The documents also call for a browser-based “Firefox Pad” tablet, aimed at “late adopters and the elderly” with a focus on simplicity and privacy, and a “Firefox Stick” that would basically be a plug-in HDMI version of Mozilla’s Firefox OS for televisions.

Keep in mind that none of these plans have been confirmed, and it’s unclear how old they are. Mozilla would also need a manufacturing partner to see its ideas through, as it tends not to make its own hardware. Still, with Mozilla itself having acknowledged that the Firefox OS team will “continue to work on the new experiments across connected devices,” it wouldn’t be surprising to see some of these projects materialize.

Why this matters: Mozilla had noble goals with Firefox OS on smartphones, aiming to deliver cheap open platform that emphasized privacy. But ultimately, it just couldn’t compete in a market that’s largely dominated by Android. Mozilla doesn’t face as high of a hurdle with some of these other device types, so there’s at least a chance that Firefox OS’s ideals can live on.

January 8, 2019
Comments Off on TP-Link Launches New Wi-Fi 6 Routers at CES 2019 With Something at Every Price Point
Got a new drone? Read this first
Purism’s Librem 13 laptop will come with Qubes OS installed
Like us on Social !
Subscribe by email !