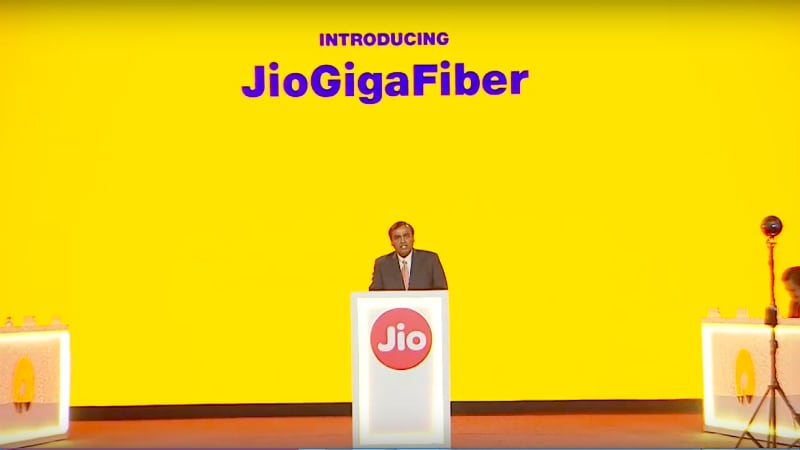 We are back with our weekly roundup of tech news. The Jio GigaFiber launch at the Reliance Industries AGM was the biggest event of the week, which also saw some smartphone launches and price cuts. The Fibre-to-the-Home (FTTH) service that was under testing for the last couple of years is now launching in 1,100 cities, under the name Jio GigaFiber. The service claims to deliver speeds up to 1Gbps, but there are no details about pricing yet. Jio GigaFiber registrations for the service will begin on August 15 from Jio.com and MyJio; the rollout in localities will be based on interest received from registrations.

As part of the Jio GigaFiber project, the company will also provide a GigaTV set-top box and a microphone-enabled TV remote that can take voice commands. The operator says GigaFiber-powered TVs will also be able to make calls to other TVs, phones and tablets powered by the service.

Also serving the network will be the Jio Smart Home Accessories Suite, which will include an audio dongle, video dongle, smart speaker, Wi-Fi extender, smart plug, outdoor security camera, and a TV camera, among others. These are designed to let users control and monitor their homes remotely using their smartphones. The company says its technicians will be able to set up the smart home system within an hour.

Airtel was quick to respond to the Jio GigaFiber announcement as it started removing the FUP limits on plans in Hyderabad. While whittling down the number of broadband plans from five to four, the operator has also removed the old data caps on the same. This means users will be able to surf the Web without the standard restrictions on downloads. However, the fine print reveals there is still a limit on commercial usage, which the company defines as 3TB. Also this week, Airtel upgraded its Rs. 799 and Rs. 1,199 postpaid plans to offer more data. The Rs. 799 plan will now offer 100GB of data a month up from 60GB, while the Rs. 1,199 plan will provide 120GB, instead of 100GB.

Ahead of the Jio GigaFiber launch, BSNL had announced the “most economical broadband plan” in the country yet. Priced at Rs. 491, this BSNL plan provides users with 20GB data per day for 1 month. Also this week, Vodafone started offering Amazon Prime subscription at 50 percent discount from the MyVodafone app, bringing down the cost from Rs. 999 to Rs. 499. However, this discount is offered only to prepaid users between 18 and 24 years of age.

The Jio GigaFiber launch was accompanied with the unveiling of Jio Phone 2. The new 4G feature phone will have a 2.4-inch QVGA display and a QWERTY keypad, compared to the alphanumeric keypad of the original Jio Phone. Other key features include KaiOS software, 512MB RAM, 4GB RAM, 4G VoLTE support, NFC, and 2000mAh battery. The Jio Phone 2 price in India will be Rs. 2,999 and it will become available for purchase on August 15.

Also, WhatsApp and YouTube support for Jio Phone and Jio Phone 2 was announced at the event. It was only hours later that HMD Global hinted that its Nokia 8110 4G feature phone will be getting WhatsApp support too. Nokia 8110 4G runs on KaiOS too, the same platform as the Jio Phone models.

Google this week was in a soup as it was reported that third-party developers are allowed by the company to scan Gmail accounts. Email data collectors are said to use software and sometime even their employees to read users’ Gmail accounts for clues about consumers they can sell to businesses. Google, on the other hand, said it is continuously vetting third-party app developers and their apps that integrate with Gmail before opening up the service to them for general access. Last year, the company had said it will stop scanning users’ Gmail accounts for personalised ads.

Sony did not have a great week either as its movie division accidentally uploaded the entire film Khali the Killer on YouTube instead of its red band trailer. The movie was on YouTube for 8 hours before it was removed from the video sharing site.

Video streaming service Netflix was in the news too this week as it announced it will remove written reviews from its platform mid-August. Users will not be able to write new reviews starting July 30. It was also reported that the company is planning to launch a new tier called Ultra, which will be positioned above the Premium option, the most expensive plan at the moment. However, the Ultra tier will feature HDR video and HD audio, and support for 4 screens, which are presently part of the Premium option. Also, the revision will come with changes to the Standard and Premium plans, halving their concurrent streams.

Samsung Galaxy On6 has a 5.6-inch HD+ (720×1480 pixels) Super AMOLED display with an 18.5:9 aspect ratio and is powered by an octa-core Exynos 7870 SoC clocked at 1.6GHz, backed by 4GB of RAM. The smartphone has a 13-megapixel camera sensor at the back, with features such as Animated GIF, Beauty Face, Best Photo, Face Detection, Food, HDR, Panorama, and Sports. There is also an 8-megapixel camera sensor with Face Unlock and an LED flash.

The Galaxy On6 comes with 32GB of onboard storage, expandable via microSD card (up to 256GB). There is a rear-facing fingerprint sensor and a 3000mAh battery. The smartphone has a new Chat Over Video feature that lets users chat with their contacts while watching a video by offering a translucent chat screen. The Samsung Galaxy On6 price in India is Rs. 14,490.

OnePlus 6 Red Edition was launched this week in India. It has the same features, both hardware and software, as the standard models unveiled in May, but sports a new paintjob. The Red Edition model has sports a metallic red shimmer coupled with the red, mirror-like fingerprint sensor that contrasts with the silver camera lens accent. With 8GB RAM and 128GB storage, the OnePlus 6 Red Edition is price at Rs. 39,999, and will go on sale in the country on July 16.

Vivo Z1i was one of the few notable international launches this week. Featuring a 6.26-inch display with 18:9 aspect ratio, the smartphone has Snapdragon 636 processor and support for AR Stickers. Other key features include 4GB RAM, dual rear cameras (13-megapixel + 2-megapixel), 16-megapixel selfie camera, 128GB internal storage, and 3260mAh battery. The Vivo Z1i price is CNY 1,898 (about Rs. 19,800), and the smartphone will go on sale on July 7.

Jio, which now has 215 million users, has also announced a new offer for JioFi devices, which brings down the effective price of the portable hotspot device to Rs. 499 from Rs. 999. It is only available for new buyers who purchase the JioFi device and a new postpaid number used with the device. They must subscribe to the Rs. 199 postpaid plan for a year, and will then be provided cashback of Rs. 500 — which brings down the effective price to Rs. 499.

Xiaomi – which made the MIUI 10 Global Beta ROM 8.7.5 available for select smartphones this week – will be hosting a sale to mark its fourth anniversary in India next week. To be held from July 10 to July 12 on Mi.com, the 4th Mi Anniversary Sale will feature flash sales, discounts, cashbacks, and deals with limited quantities of products. The flash sales will be held at 4pm on all days of the Xiaomi sale, and will fans a chance to buy products such as Mi LED Smart TV 4 (55-inch), Redmi Y2, Redmi Note 5 Pro, and Mi Band 2 at Rs. 4. While the sale will start for the general public on July 10, Reward Mi members will get access to the sale from July 9 noon itself.

Xiaomi Mi A2 was in the news this week as the smartphone appears in leaks more than once. One of the leaks showed the About Phone section of the Mi A2, revealing the device will run stock Android 8.1 and Snapdragon 660 SoC. The unit in the image also has the May security patch installed. The other leak has a photo allegedly taken using the Mi A2, with the EXIF data showing a 12-megapixel camera with aperture of f/1.75 on the smartphone.

Its sibling, the upcoming Xiaomi Mi Mix 3, also made appearances via leaks. These included renders showing the pop-up selfie camera, and a leaked teaser that suggests a September launch for the phone. Apart from the standard model, the phone will reportedly come in a variant with ceramic back as well as a Ferrari Edition model.

Next week will also see the launch of the Moto E5 Plus smartphone in India. It will be an Amazon exclusive in the country and will be unveiled at an event on July 10. Key features of the Moto E5 Plus are the 6-inch display, 5000mAh battery and Snapdragon 435 SoC.

A day later, Infinix will launch a smartphone that the brand says is made for watching videos. Also on July 11 will be the India launch of the Oppo Find X smartphone. The top-end Find X features a motorised camera to deliver a bezel-less experience, along with 3D face scanning, Snapdragon 845, and 8GB RAM.

Though it is more than a week away, Amazon Prime Day sale kicks off 12pm on July 16 to 12am on July 18. The Amazon sale will feature deals on popular products, exclusive launches, and video releases before and during the 36-hour period. Six different flash sales, starting 1pm on July 16, will be held during the Prime Day sale, and up to 10 percent cashback or discount is valid on HDFC Bank card/ EMI and Amazon Pay transactions. As the name suggests, the sale will be open only for Amazon Primemembers in India.

December 30, 2015
Comments Off on Lenovo teases K3 Note successor, expected to be launched in January 2016

December 30, 2015
Comments Off on OnePlus launches exchange offers on its smartphones in India

December 30, 2015
Comments Off on vivo Y51 with 5-inch display, 2GB of RAM and 4G LTE launched in China
Smartron Said to Launch Sachin Tendulkar-Branded Smartphone Soon
OnePlus May Replace Dash Charge With Warp Charge
Like us on Social !
Subscribe by email !