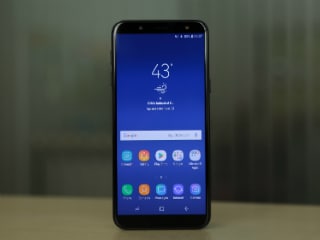 Galaxy J6, a mid-range smartphone featuring Infinity Display design, was launched in India by Samsung in May. Now, the manufacturer is reportedly planning to unveil a higher-end variant of the handset in the country. According to a new report, the new model – Galaxy J6+ – will be aimed at countries in the Commonwealth of Independent States (CIS) and Serbia. However, in India, the smartphone will reportedly launch as Galaxy On6+. Notably, the handset will be powered by the Snapdragon 450 processor. Meanwhile, a Samsung’s first Android Go smartphone has been certified by the Federal Communications Commission in the US.

As per an XDA Developers report, the presence of a Samsung Galaxy J6+ variant, codenamed ‘j6plte’, was first discovered by a contributor who is said to be maintaining several builds for Samsung devices. The firmware files for ‘j6plte’ apparently show that the number corresponds to a model named “Samsung J6-Plus LTE CIS SER.” As mentioned, the Galaxy J6+ variant will reportedly pack a Qualcomm Snapdragon 450 SoC, as opposed to the Exynos 7870 SoC present in the Galaxy J6. Additionally, the smartphone may feature a dual camera setup at the back and a large 4350mAh battery.

In India, Samsung may launch the Galaxy J6+ as the Galaxy On6+. To recall, the Galaxy J6 and Galaxy On6 have almost identical features and specifications. The report adds that the availability of the smartphone in India is “speculation on our part.”

Coming to the other specifications suggested in the leak, the Galaxy J6+ will sport a 5.6-inch HD+ (720×1480 pixels) Super AMOLED display with an 18.5:9 aspect ratio. It will feature a single selfie camera with LED flash as well. Also, it will run Android Oreo out-of-the-box. Notably, there is no information available on the availability and price of the Galaxy J6+.

Meanwhile, a recent certification by the Federal Communications Commission (FCC) has indicated that Samsung’s first Android Go smartphone is on its way. For those unaware, Android Go is a lighter variant of the Android operating system and is meant for budget smartphones.

Samsung hasn’t yet made any confirmation about its first Android Go smartphone that’s been doing the rounds of the rumour mill for the past few weeks. The FCC listing spotted by UberGizmo does not provide too many details about the handset aside from the model numbers – SM-J260G, SM-J260G/DS, SM-J260Y, and SM-J260Y/DS.

November 20, 2018
Comments Off on Samsung Galaxy S10 Tipped to Have a Display Hole, Triple Camera Setup
Samsung Sets Up ‘World’s Largest Mobile Factory’ in Noida
Samsung, Xiaomi Take 30 Percent Share Each of Indian Smartphone Market in Q2: Canalys
Like us on Social !
Subscribe by email !