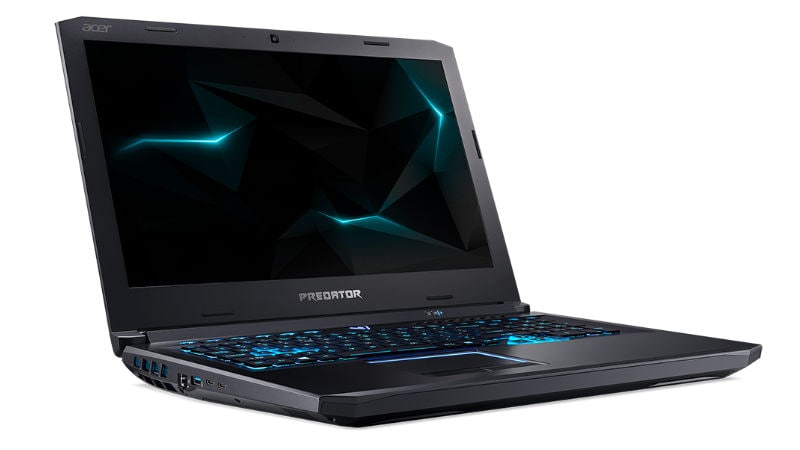 Acer has launched the new Predator Helios 500 gaming laptop in India. The company has been taking giant strides in the gaming market over the past few months, launching several mid-range and premium gaming laptops and accessories. Acer had first unveiled the Predator Helios 500 alongside a varied range of gaming devices at its [email protected] global press conference in New York in May 2018. The laptop has now been launched in India, and it comes in two variants, one with up to Intel Core i9-8950HK and Nvidia GeForce GTX 1070 8GB graphics, and another with up to AMD Ryzen 7 2700 and AMD Vega 56 graphics. The company is touting features like VR-ready performance, advanced thermal technologies, and fast connectivity.

The Predator Helios 500 gaming laptop is already available in India at Acer malls and with the company’s exclusive online retail partners. The Intel Core i9 variant is available starting at Rs. 2,49,999 and the Core i7 variant is planned to hit the market soon with a pricing of Rs. 1,99,999. Notably, Acer has not announced any information about the AMD Ryzen 7 variant of the Helios 500.

Acer says that the Predator Helios 500 has been designed for “extreme gamers”. As mentioned, it is powered by 8th generation Intel Core i9-8950HK and Nvidia GeForce GTX 1070 8GB graphics or AMD Ryzen 7 2700 and AMD Vega 56 graphics options. The laptop sports 4K Ultra-HD or full-HD IPS 17.3-inch displays with 144Hz refresh rates. It comes with Intel Optane memory, NVMePCIe SSDs, Killer DoubleShot Pro, and up to 64GB of RAM. Acer says that the notebook is ideal for gaming with graphic-intensive AAA titles and live streaming.

Also, Nvidia G-Sync technology is supported on both the inbuilt display and external monitors. The Predator Helios 500 has dual Thunderbolt 3 ports and HDMI 2.0 ports support up to three external monitors. Additionally, there are two speakers, a subwoofer, and it supports Acer TrueHarmony and Waves MAXXAudio technology.

The Acer Predator Helios 500 is equipped with two of Acer’s proprietary AeroBlade 3D metal fans, and five heat pipes that distribute cool air to the machine’s key components while simultaneously releasing hot air. Users can control the fan speed using the PredatorSense app. The app can also be used to control and monitor the notebook’s vitals from one central interface, including overclocking, lighting, hotkeys, temperature, and fan control.

Meanwhile, there is a backlit RGB keyboard in the Predator Helios 500 that offers four lighting zones with support for up to 16.8 million colours. Also, the laptop features anti-ghosting technology that provides control for executing complex commands and combos.

“The demand for our Predator series has been phenomenal, hence we have expanded the Helios gaming notebook line to provide our gamers with extreme performance on the go. With top of the line processors, graphics card and advanced cooling with custom control for ultimate gaming the Predator Helios 500 represent the epitome of laptop gaming,” said, Chandrahas Panigrahi, CMO and Consumer Business Head, Acer India.