admin
August 6, 2018
Comments Off on Samsung Said to Be Sending Invites for Launch Event Ahead of IFA 2018
Samsung
Fortnite, IFA, IFA 2018, Samsung 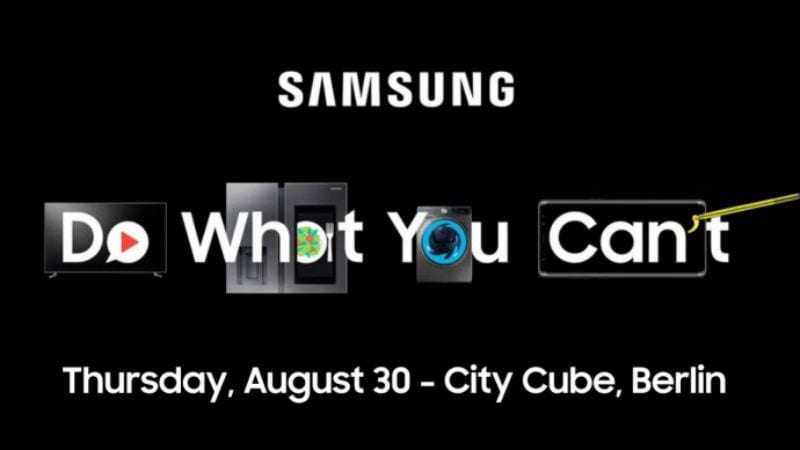 Galaxy Note 9, Samsung’s upcoming flagship, is set to get unveiled on August 9. While the smartphone will launch at the company’s Galaxy Unpacked event, the South Korean giant is now expected to release several other products at IFA 2018. Samsung has reportedly sent out media invites for the launch of its new range of consumer electronics products at IFA in Berlin. The event has been scheduled for August 30, a day before the trade show starts. Separately, a report has claimed that Samsung Galaxy Note 9 pre-orders will bring 15000 V-Bucks in-game currency in the mobile game Fortnite.

The IFA 2018 annual trade show will be taking place from August 31 to September 5 in Berlin. While the event will host a number of technology companies, Samsung has confirmed that it will have a press conference on August 30, GSMArena reports. The company will launch the Galaxy Note 9 flagship next week, but it will seemingly unveil new smart TVs and home appliances such as refrigerators and washing machines. The invite image also alludes to a smartphone or tablet compatible with the S Peni stylus.

Having already launched the Galaxy Tab S4, Samsung is set for the highly-awaited Galaxy Unpacked event on 9 August. But it now appears that it is Samsung’s month, with another event coming up. While the products to be unveiled ahead of IFA 2018 has not been mentioned explicitly in the invite for the press conference, but looking at the invite, it is quite evident what to expect from the company. Additionally, we can also expect the rumoured Galaxy Watch at IFA 2018.

Coming to Fortnite for Android, while its release date is yet to be announced, Epic Games has already said it will be out soon. According to an XDA Developers report, Samsung and Epic Games have partnered to launch Fortnite Mobile on Android exclusively on the Samsung Galaxy Note 9. Interestingly, the game will reportedly be Galaxy Note 9 exclusive for a month and then Samsung Galaxy exclusive for another 3 months.

Also, citing sources, the report added that the deal will include Epic Games giving away V-Bucks, skins, emotes, and more to those who pre-order the Samsung Galaxy Note 9. Folks at XDA Developers have spotted a string within the Epic Games site that confirms the Galaxy Note 9 pre-orders will come with 15,000 V-Bucks. Notably, Fortnite is a free-to-play game but Epic Games offers in-app purchases that can be acquired by purchasing V-Bucks. The company had confirmed that Fortnite is not coming to the Google Play Store; instead, it will be accessible via a client known as the Fortnite Installer.

October 16, 2018
Comments Off on Samsung Galaxy S9, S9+ to get an improved selfie camera soon