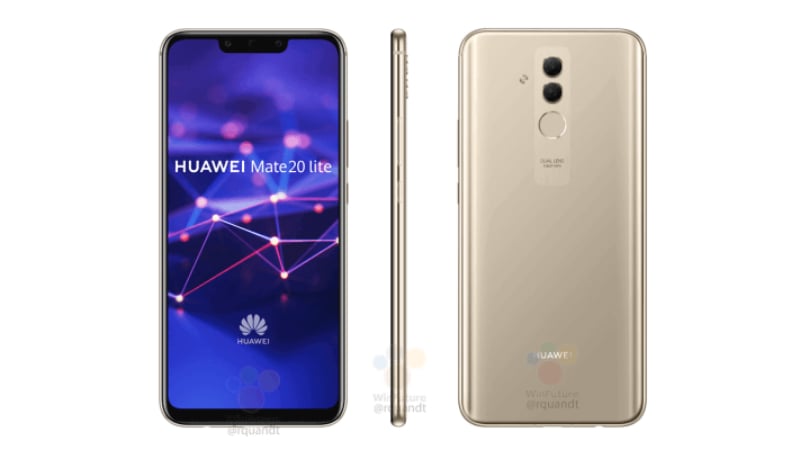 While much about the Huawei Mate 20 was revealed through some alleged firmware files earlier this month, it’s now the time to get deeper into the Mate 20 Lite as well. The specifications and press renders of the Huawei Mate 20 Lite have now surfaced online to detail much about the affordable Mate series model. The new smartphone is speculated to go on sale with a starting price of around $400 (approximately Rs. 28,000). This is cheaper than the price of the Mate 10 Lite that was launched in October last year at EUR 399. However, unlike last year’s offering, the Mate 20 Lite is expected to debut with a notch design. The handset is also said to have an octa-core HiSilicon Kirin 710 SoC that is likely to boost the performance to an extent over the Kirin 659 that was featured on the Mate 10 Lite. The previously surfaced firmware files suggested that the Mate 20 will come with a Kirin 980 SoC and include wireless charging support.

The Huawei Mate 20 Lite will go on sale by the end of August with a price tag of around $400, reportsWinFuture.de, citing people familiar with the development. The handset is said to have a 6.3-inch full-HD+ (1080×2340 pixels) LCD panel and include a HiSilicon Kirin 710 SoC along with four cores at a clock speed of 1.7GHz and the other four cores at 2.2GHz. The chipset is reportedly coupled with 6GB of RAM and 64GB of onboard storage. It hasn’t been revealed whether the storage is expandable via microSD card. The handset is said to have four onboard cameras, including a dual rear camera setup that has a 20-megapixel primary sensor and a 2-megapixel secondary sensor – along with an LED flash. The primary sensor at the back has an f/1.8 aperture on top. Also, a dual camera setup is available at the front with a 24-megapixel primary sensor and a 2-megapixel secondary sensor.

Huawei is reported to have provided 4G LTE support on the Mate 20 Lite. Also, there is dual-band Wi-Fi and Bluetooth v4.2 on the connectivity front. The smartphone is said to have a 3,650mAh battery that sits under the glass back cover. Furthermore, the new Mate 20 model reportedly has 7.6mm of thickness and 172 grams of weight.

Alongside highlighting its specifications, WinFuture.de has leaked the press renders of the Huawei Mate 20 Lite. The renders show a premium-looking device that has a curved back and a metal-finish frame. Also, there is a rear-facing fingerprint sensor that is aligned with the vertically placed dual rear camera setup.

We need to wait for sometime to get the official Huawei Mate 20 Lite price and availability details.

Vivo V9 Pro to Go on Sale for the First Time in India Today: Price, Specifications

October 10, 2018
Comments Off on Vivo V9 Pro to Go on Sale for the First Time in India Today: Price, Specifications

ASUS ZenFone Go 4.5 with quad-core CPU and 8GB of storage goes on sale

December 29, 2015
Comments Off on ASUS ZenFone Go 4.5 with quad-core CPU and 8GB of storage goes on sale