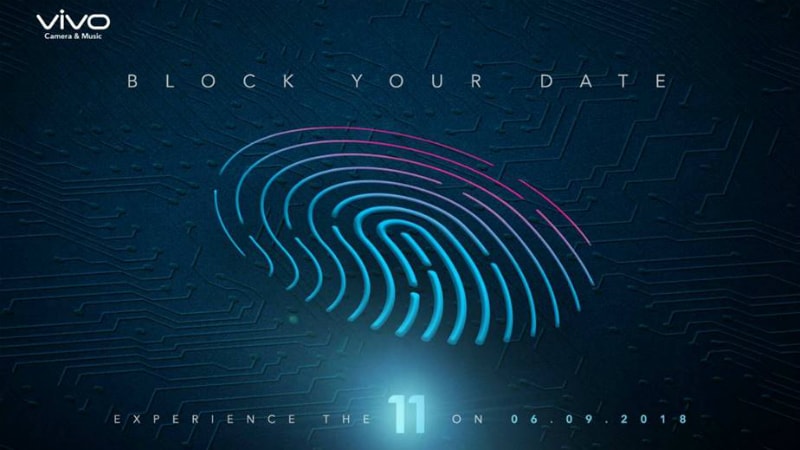 Vivo V11 Pro is set to launch in India early next month, with the Chinese company sending media invites on Monday for a launch event in Mumbai on September 6. The invite clearly states the name of the smartphone, and reveals it will sport a waterdrop-style display notch, while an earlier ‘block your date’ teaser (seen above) had revealed the presence of an in-display fingerprint sensor on the handset, similar to the one seen previously on the Vivo X21. The Vivo V11 can be expected to be the successor the V9 and has been leaked a couple of times in the past, and more information, such as the price, can be expected in the grapevine soon.

In a previous leak, it was reported that the Vivo V11 (not the Pro variant) has a waterdrop display notch design that debuted with the Oppo F9 earlier this week. Live images of the handset have been revealed too. This similar design was also leaked on the Vivo X23 previously.

As for the Vivo V11 specifications, it is expected to run Android 8.1 Oreo out-of-the-box, and sport a 6.41-inch display with a possible full-HD+ resolution of 1080×2340 pixels and 19.5:9 aspect ratio and 128GB of onboard storage. It is rumoured to arrive with a Qualcomm Snapdragon 660 SoC, paired with 6GB of RAM. Battery capacity of the smartphone is expected to be 3,400mAh. The phone is rumoured to arrive with an upgraded fast charging technology.

In terms of optics, it is expected to sport a dual rear camera module with a 12-megapixel primary and a 5-megapixel secondary sensor. The phone will feature a 25-megapixel selfie camera. The Vivo V11, according to the report, is expected to one of the most affordable smartphones in the market with an in-display fingerprint sensor. Dimensions mentioned in the report are 157.9x75x7.9mm and weight is 156 grams. As we mentioned, the Vivo V11 has been leaked in the past, while the Vivo V11 Pro is a new mention – though we can expect it to sport similar specifications.