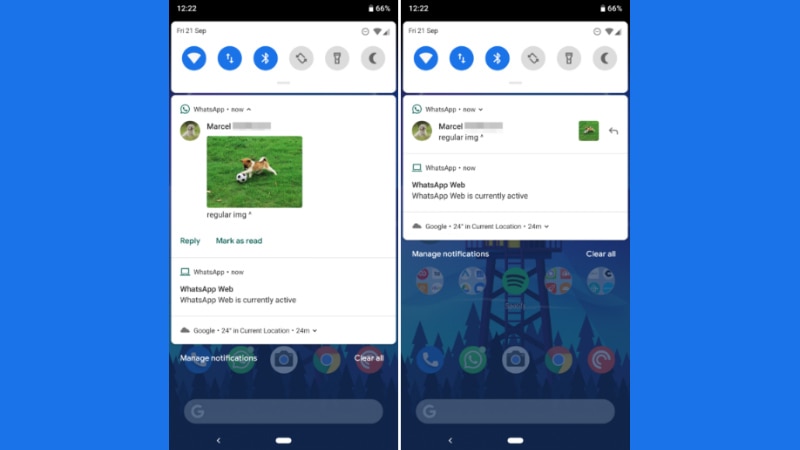 With Android 9 Pie now rolled out to the Pixel family, WhatsApp has started testing support for Messaging Style inline images for the notification panel. WhatsApp used to show inline images in notifications earlier as well, but it looks to now support the new MessagingStyle notification format for expandable and collapsible inline images in the future. WhatsApp is currently testing the feature in the beta channel, and another notable addition spotted in Android beta is the availability of a new sticker pack called Biscuit.

Starting with the new design for inline messages in notifications, Android Police spotted this change in Android beta v2.18.291. This feature will only work on a device running Android 9 Pie, and it will allow the WhatsApp image notification to expand and collapse to show the picture’s preview. The rest of text messages will show up as they used to above and below the image preview. This doesn’t work for GIFs and videos, and they still show up in a small icon notifying the user that they’ve received it, but those won’t be collapsible or expandable for preview. When an image is shared in a WhatsApp group, the photo still expands for preview, but when collapsed it shifts to the right, with the group icon sitting next to it.

The report states explicitly that this feature works only with Android Pie, and therefore all phones running on old Android versions or even Oreo won’t be able to see it in beta or after the stable release as well.

August 12, 2018
Comments Off on DigiLocker Documents Must Be Accepted by Traffic Police for Driving Licence, Vehicle Registration: Ministry of Road Transport
Ola Announces Plans to Enter New Zealand, Its Third International Market
Facebook Testing Snap Map-Like Interface for ‘Nearby Friends’ Feature
Like us on Social !
Subscribe by email !