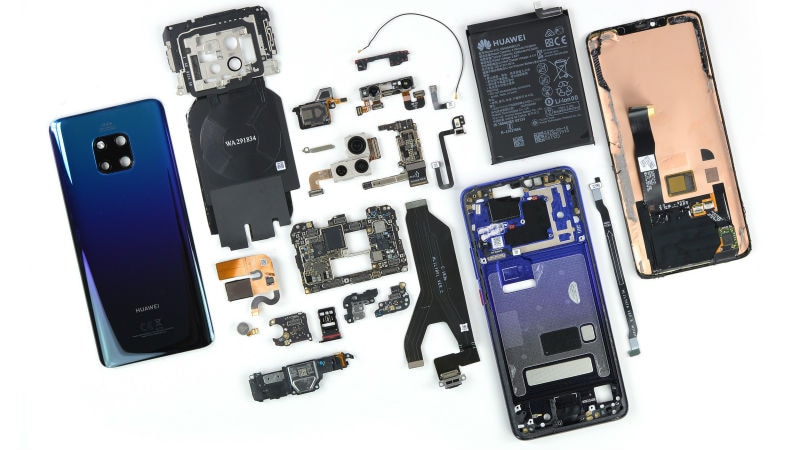 While there were no surprises found in the specifications department, not unusual as most Androidphones are released with a detailed list of hardware components (unlike Apple devices), the iFixit teardown revealed more details regarding the internals of the Huawei Mate 20 Pro. The iFixit teardown of the smartphone reveals that several of its components are modular and can be replaced independently. It also added that replacing the batteries is technically possible, by removing only the back panel and mid-frame.

The iFixit teardown begins by heating the back glass of the Huawei Mate 20 Pro to soften the adhesive holding the smartphone inside. There is no flex cable tethered to the glass because of an absence of rear-mounted fingerprint scanner, so the glass comes off easily.

The report says that between the glass and battery is a mid-frame assembly that houses a bi-directional wireless charging coil, an NFC antenna, and the dual-tone LED flash. This part is held together by a flex connector and eight screws.

The Huawei Mate 20 Pro’s motherboard is relatively small compared to the overall body of the phone to make space for the battery. With the 3D face unlock hardware and the triple rear camera taking up more motherboard area, the company had to cut some camera holes and change the layout a bit, the report says. Also, the board is held together by nine flex cables so there is a lot of things going on inside.

Using a spudger, the folks at iFixit managed to take out the rear camera setup as well, which sits inside cutouts within the mainboard. The other things found inside the motherboard are Toshiba 128GB Universal Flash Storage, HiSilicon Hi6421 power management IC, among other things.

The teardown around the display notch area contains the 3D unlock assembly, that includes a dot projector, 24-megapixel sensor, rangefinder or proximity sensor, flood illuminator, ambient light sensor, IR camera, and a “rectangle of mystery”. Meanwhile, the Mate 20 Pro teardown revealed that the smartphone’s SIM tray supports a new memory card format called nano-memory (NM). Also, since the USB Type-C charging port is mounted to a large flex cable, users only have to replace the main cable instead of a more expensive daughterboard, the report claims.

Due to the curved screen, replacing the front glass without destroying the display is extremely difficult. The iFixit report jokingly added that eleven opening picks dramatically improved this smartphone’s aerodynamics.

The iFixit report says that only standard Phillips screws are used in the Huawei Mate 20 Pro along with an average amount of adhesive. Also, because of the sandwich build around the motherboard, there are more flex connectors than average and repairs will consume more time. The report adds that the glued-down front and back glass means a greater risk of breakage while making repairs difficult to start. Additionally, screen repairs require a lot of disassembly while battling tough adhesive. Lastly, a broken screen possibly means you need to replace the fingerprint reader as well, or vice versa. In conclusion, iFixit gave both the smartphones a repairability score of 4 out of 10.

December 30, 2015
Comments Off on ZTE unveils the Blade A1, a budget phone that boasts a fingerprint sensor

October 16, 2019
Comments Off on Honor 20 Lite to Launch in China on October 22, Company Confirms