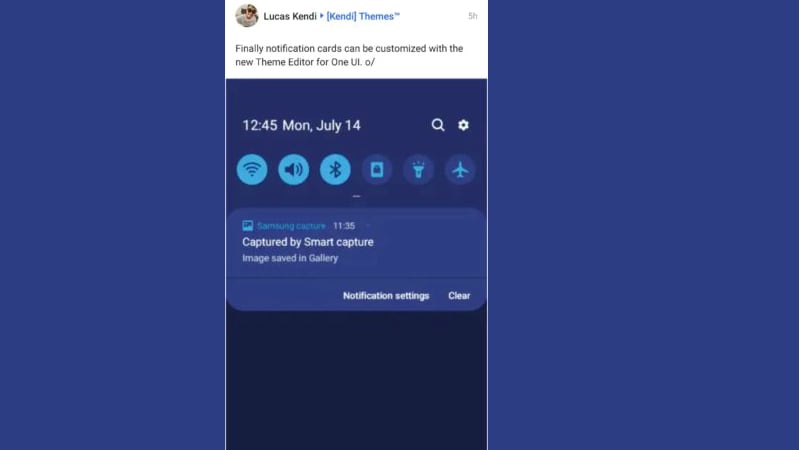 Samsung rolled out Android Pie-based One UI beta for Indian users just a few days ago, and released a new beta update in other parts of the world as well for Samsung Galaxy S9₹ 41,990 and Galaxy S9+ users. After the beta release, the company is now rolling out another hotfix update for fixing bugs that creeped in with the update. Furthermore, Samsung is also bringing more customisations of themes with the One UI/Android Pie update. The new Theme Editor will now allow users to change how the notification cards look; based on the theme you apply.

Famous theme designer Lucas Kendi says (via SamMobile) that One UI allows for more theme customisation than before. Themes applied to Samsung phones after updating to One UI can be edited to the user’s preference. The Theme Editor allows for customisation of notification cards as well, something that wasn’t possible before. While the theme changed on the entire phone, the notification cards that show up in the notification shade and the lock screen remain the same white in colour. However, that is all set to change with the new One UI update. Kendi even shared a screenshot which can be seen above.

The One UI is expected to offer free themes for only 14 days after it is applied, after which they will be automatically removed. Samsung’s push for paying up for paid themes also brings more functionality with it.

Samsung has promised Android Pie for compatible phones in January 2019, and has even started beta testing the update on Samsung Galaxy S9 and Samsung Galaxy S9+₹ 52,490 devices. In fact, the third beta version was rolled out just a few days ago, and now the company is rolling out a quick hotfix update to fix all the bugs. SamMobile reports that the Galaxy S9 and Galaxy S9+ faced a problem with visibility of certain functions in the night mode, and reception settings as well, after the latest beta update. To solve these issues, the company has released a hotfix update for Galaxy S9 and Galaxy S9+ users in South Korea.

The report states that the Galaxy S9 and Galaxy S9+ owners in the beta program would get firmware version G960NXXU2ZRLA and G965NXXU2ZRLA respectively after the hotfix is applied. With South Korea now receiving the hotfix update, other beta markets should also get it soon. Ensure that you backup your device before installing the update.