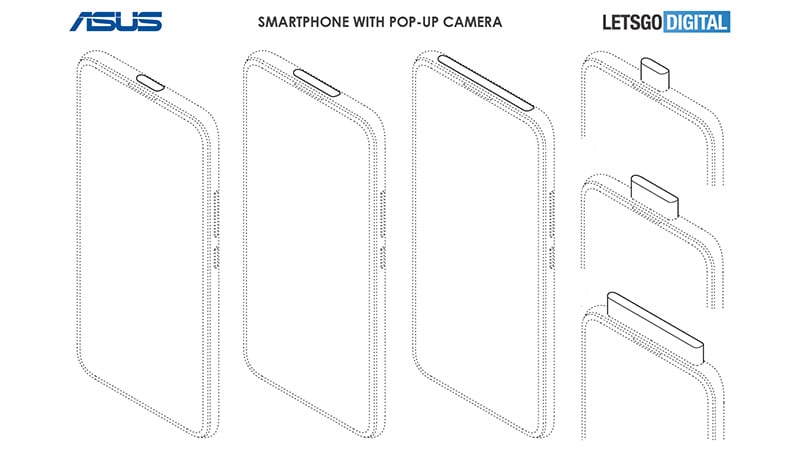 The year 2018 has been the year of smartphones with a notched display. Manufacturers tried their best to extract as much screen estate as they could by making the notch smaller. In the pursuit of bezel-less displays we have seen manufacturers like Vivo and Oppo opting for a mechanical pop-up camera on the Nex and Find X smartphones respectively. It now appears Asus may have a similar smartphone design in the works.

We can expect a lot more phones with bezel-less displays in the coming year. Samsung and Huawei have already started the trend by going for an all display setup with a hole at the corner for the selfie camera. We have seen such a setup on the Samsung Galaxy A8s and the Huawei Nova 4. The upcoming Honor V20 aka Honor View 20 is also confirmed to sport a similar design.

Asus seems to be open to both approaches for a bezel-less smartphone if a recent patent filing is to be believed. According to patents filed at the European Union Intellectual Property Office (EUIPO) by Asus, the Taiwanese company might be working on a smartphone with a pop-up module or a display hole for the selfie camera.

These patents were found by LetsGoDigital that show a smartphone with a pop-up camera module in three different sizes. The first model has a small pop-up camera big enough for a single selfie camera, the second one is slightly wider and can accommodate more than a single camera module. The third model has a much wider pop-up which can accommodate multiple sensors for selfies as well as 3D Face recognition.

While this hints that Asus might be working on smartphones with such designs. It remains to be seen when these smartphones finally make it to the market.

Honor View 20 India Launch Set for January 29, a Week After Its Global Launch

January 9, 2019
Comments Off on Honor View 20 India Launch Set for January 29, a Week After Its Global Launch

December 30, 2015
Comments Off on ZTE unveils the Blade A1, a budget phone that boasts a fingerprint sensor