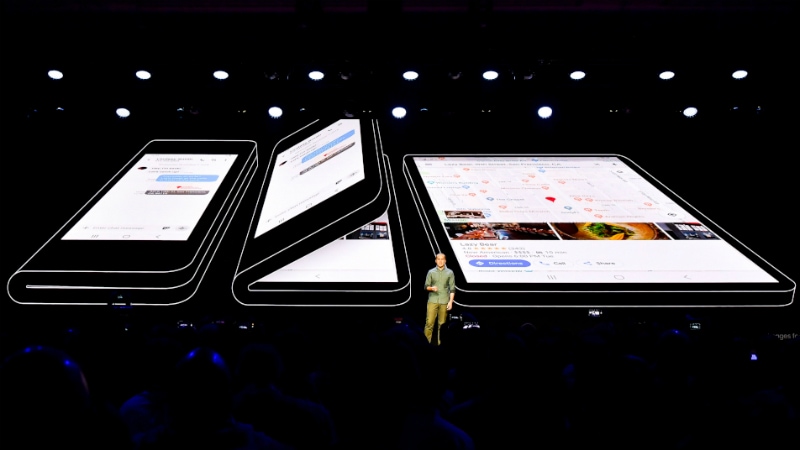 When it comes to foldable smartphones, Samsung already emerged as one of the most active players. The South Korean giant gave a glimpse of its foldable phone prototype at the Samsung Developer Conference (SDC) last November. It also announced that its foldable smartphone form factor would be based on an Infinity Flex Display. Now, Samsung is said to have showcased its foldable phone prototype in a closed-door meeting at CES 2019 in Las Vegas. The company has previously been reported to be planning to produce only a million units of its first foldable smartphone. Another report had claimed the new offering could carry a price starting at GBP 1,500 (roughly Rs. 1,34,500).

Samsung showcased its foldable phone prototype to customers in a closed-door meeting at CES 2019on Tuesday, reports The Korea Herald. The display panel on the foldable smartphone prototype is said to be thinner when fully opened, but it gets thicker when folded to give a stable grip.

Citing a senior executive, The Korea Herald reports that Samsung is at present “finishing up optimisation processes” for the hardware and software of its foldable phone. “When unfolded, Samsung’s foldable phone does not show any crease indicating it had been bent,” the executive said, as quoted by the publication, adding that the display felt “very smooth”.

Instead of offering a completely foldable design that could make the smartphone quite fragile, it is said that Samsung is testing out a model whose sides remain slightly lifted when folded. The prototype reportedly does show a crease mark when being folded, however, the executive said that the issue would be resolved in the final version.

The design of Samsung’s foldable smartphone prototype is said to be similar to what was featured on some clamshell Nokia phones in the past. However, another executive at Samsung’s booth at the CES told The Korea Herald that the new device is meant to be “specialised for multitasking” and would be quite useful for people who “own both a smartphone and tablet.”

Samsung could target majorly men in their 40s as the prime customers for its foldable phone. It is believed that unlike millennials, men in their 40s are familiar with “folder phones” that debuted in the late 1990s. They are also considered to be the major customers for mobile devices with bigger screen sizes than the regular ones.

If we believe the ongoing rumours, Samsung could unveil its first foldable smartphone model sometime in the first half of this year. It is speculated that there will be around a million units with a starting price of GBP 1,500 that could go up to GBP 2,000 (roughly Rs. 1,79,400).

As announced at the SDC in San Francisco, California, the foldable smartphone form factor will feature an Infinity Flex Display. The company is also working with Google to provide relevant optimisations on Android to support its foldable hardware. Moreover, the first foldable smartphone by Samsung will come with One UI, the newest proprietary interface that is already available on the Galaxy S9₹ 48,499and Galaxy Note 9₹ 59,990 models.