Samsung Galaxy A31 Spotted on US FCC Site, Tips Connectivity Options and Dimensions

Samsung Galaxy A31 Spotted on US FCC Site, Tips Connectivity Options and Dimensions 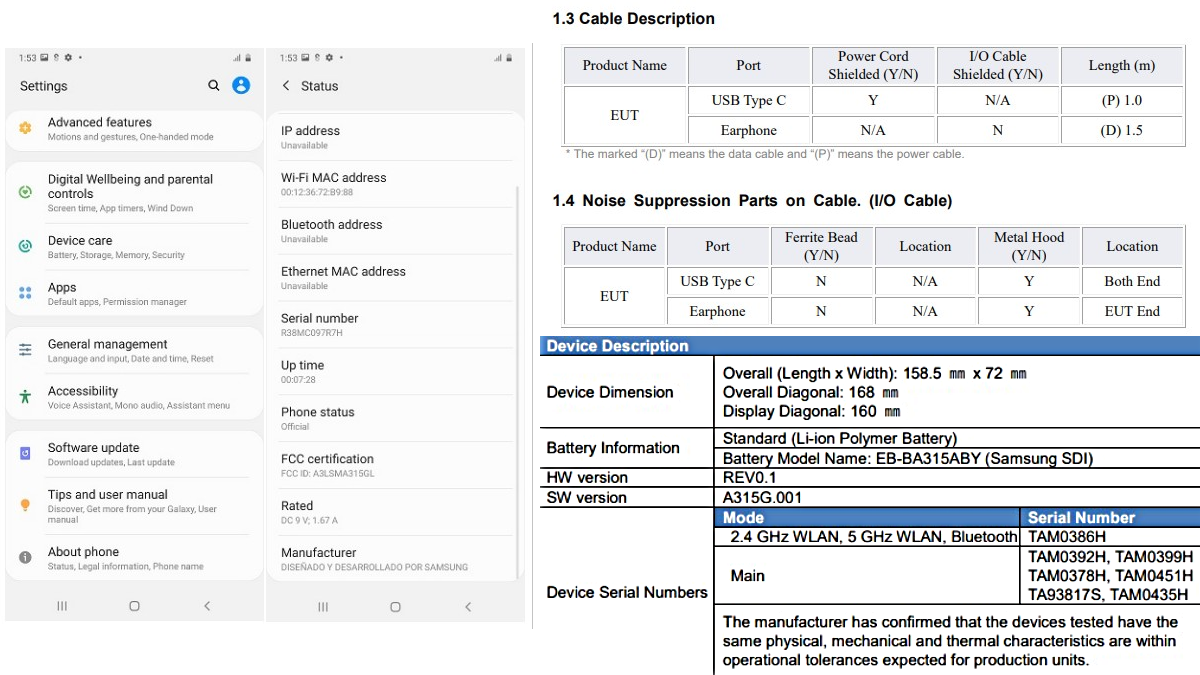 Samsung Galaxy A31 has been spotted on the US FCC certification website, which shows the phone’s dimensions and connectivity support. Images have also surfaced of the phone’s settings on the FCC site, showing off some specifications. To recall, the smartphone’s support page recently went live, while it was also said to have received Bluetooth certification. It was recently also spotted on Geekbench. All these sightings indicate the Samsung Galaxy A31’s launch is not too far off. Read on for more details about the latest Galaxy A31 leak.

As per the US FCC listing of the Samsung smartphone with model name SM-A315G and FCC ID A3LSMA315GL, the Samsung Galaxy A31 is expected to have support for dual-band Wi-Fi – i.e., 2.4GHz and 5GHz – apart from 4G LTE. The FCC listing also shows the presence of Bluetooth v5.0 which was previously leaked via Bluetooth SIG certification for the model number SM-A315F/DS. It states that the alleged Galaxy A31 will have a USB Type-C port. Separately, the image of the phone’s About Phone page tips 15W charging support.

The FCC listing also indicate the Samsung Galaxy A31 will measure 158.5mm in height and 72mm in width but the thickness has not been mentioned. The FCC listing also states that the overall diagonal measurement of the phone is 168mm while the display, when measure d diagonally, is 160mm.

To recall, a recent Geekbench listing of the phone, showed there will be a variant with 4GB RAM and will run Android 10. The processor listed on Geekbench is MT6768V/CA which is the model number for the MediaTek Helio P65 SoC. Previous leaks have also suggested that the Galaxy A31 will come with a massive 5,000mAh battery

Infinix Hot 10 India Launch Set for October 4, to Be Sold via Flipkart

October 4, 2020
Comments Off on Infinix Hot 10 India Launch Set for October 4, to Be Sold via Flipkart

Infinix Snokor May Be an Upcoming Smartphone Series by the Company

June 29, 2020
Comments Off on Infinix Snokor May Be an Upcoming Smartphone Series by the Company

Redmi 9A Next Sale on September 9 at 12 Noon via Amazon, Mi.com: Price, Specifications

September 4, 2020
Comments Off on Redmi 9A Next Sale on September 9 at 12 Noon via Amazon, Mi.com: Price, Specifications

January 27, 2020
Comments Off on Samsung Galaxy M21 Specifications Tipped Through Geekbench Listing
Oppo Reno 3 Pro With Dual Hole-Punch Selfie Camera Teased on Amazon, Flipkart Ahead of India Launch
Infinix Snokor May Be an Upcoming Smartphone Series by the Company
Like us on Social !
Subscribe by email !